Choosing The Right Fuel And Oil For Your Marine Engine

Your boat’s engine powers your on-water adventures, so keeping it well-maintained is critical for making the most of your time on the water. Using the right type of oil and fuel is critical for both performance and lifespan.

There are two main categories of marine outboard engines: two-stroke and four-stroke. Most new engines shipped today are four-stroke, however, there are still a large number of two-stroke engines on the water. 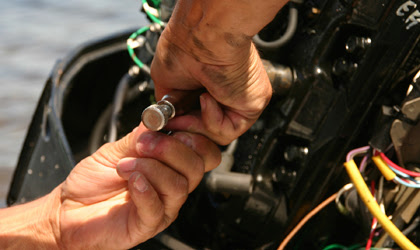 Newer boat engines are also engineered to be consumer and environmentally friendly —with reduced emissions and extended lifespans. However, these advanced technologies place severe demand on engine lubricants and make it critical to choose the correct lubricant for your engine.

Use the right lubricant — Marine and auto oil are not interchangeable.

Although oil in a four-stroke marine engine performs the same function as it does in an automobile engine, passenger car motor oil should not be used in marine engines. The two primary reasons for this: water and wear.
Consider that corrosion caused by water is a primary concern for marine engines. Oils made for cars are not designed to provide the high level of corrosion protection marine engines require.

Car oils also fall short in the protection department. Because four-stroke outboard engines run faster than car engines, spend long periods running at extremes of speed and can spend long periods out of use, they have very specific requirements for anti-wear protection that car oils do not provide.

The best way to protect your engine is to use the outboard engine oil recommended by the engine manufacturer or to look for the National Marine Manufacturers Association (NMMA) logo on the oil. NMMA tests and certifies oils to ensure they meet marine engine needs.

Use the following list to determine the correct oil for your boat’s engine:

Use the right fuel—Understand the Ethanol Issue

Using the right fuel is also critical to the performance and life span of your outboard engine. In the United States the introduction of ethanol into the fuel supply to meet the mandates of the Renewable Fuel Standard has had unintended consequences for boaters.

Currently, the Environmental Protection Agency (EPA) is pushing to change the automotive/light duty truck fuel standard from the current 10 percent ethanol (E10) used in many gasoline blends to 15 percent ethanol (E15). Consequently E-15 is expected to become the predominant fuel in the U.S. marketplace in the next 10 to 15 years.

This presents a problem for boaters because tests conducted by marine engine manufacturers under the direction of the Department of Energy’s National Renewable Energy Laboratory concluded that E15 fuels not only damage marine engines, but also caused them to exceed EPA emission standards.
Fortunately, any retailer that chooses to sell E15 fuel must post warning labels at the fuel pump. The key for boaters is to pay attention to the labels and not use E15 to fill up at the pump. Marinas, of course carry gasoline without ethanol, and are probably the safest place to fill up if you do not want to worry about the gas you are using in your boat.

Navnit Marine provides Luxury Motor Yacht Servicing in Mumbai India at its Marina at Uran. You can avail yacht management services from us.We offer owners a management support service capable of handling the full spectrum of yacht operations. Our dedicated team has the vast knowledge and experience to deliver solutions. We provide owners with reduced costs and downtime with effective management and budget controls. Ultimately, giving owners greater safety, enjoyment and peace of mind.

To Know More About Motor yacht Servicing In India, Contact Navnit Marine at022 6677 6659 or Mail us at info@navnitmarine.com

We have various Yachts and Boats Like Princess Yachts, Bayliner Boats, Meridian Yachts and Many More.